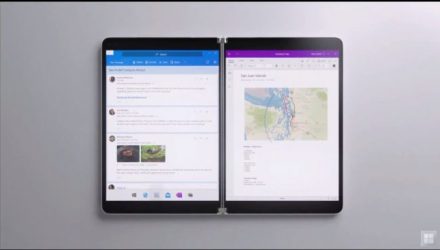 Has Microsoft (MSFT) just taken the biggest risk in hardware in 20 years with the unveiling of its Surface Neo?

The two-screened laptop opens like a book, which has been a highly anticipated piece of hardware since the original kind of courier prototype design from Microsoft.

Reporting from the Microsoft press event in New York City, CNBC co-anchor of ‘Squawk Alley’ Jon Fortt said there’s nothing like it on the market right now, but noted it’s not coming out until more than a year from now – next holiday season.

“They’re announcing it now because they want developers involved in developing software for this new version of Windows,” Fortt said. “They have not announced pricing, but this is sure to be a premium product.”

Fortt said the Surface Neo does come with a couple of risks for Microsoft.

Another risk is its release date, he added.

“When you announce a piece of hardware that’s not coming out for a year plus, are people going to continue to buy what you’re putting out this year?” he said. “Maybe they’ll be able to differentiate between these two things: people who want a tablet or want a laptop now, but are going to buy it and wait for next year. Maybe there’s a premium market for this Surface Neo device.”

“They had Adobe on stage demonstrating Adobe Creative Cloud running on that device,” Fortt said. “Adobe is the big guns that you bring in when you show that something really is a full-fledged computer because Adobe software tends to be very demanding when it comes to productivity and processing power. They’ve said that this ARM processor runs at 7 watts versus 2 watts that’s usually where the arm runs. They worked with Qualcomm to really enhance the power of that. Microsoft also adding its own than AI engine to that, so we’ll be taking a closer look at that trying to put that through the paces and consider the implications for the whole Windows market, not just a Surface Pro X but also Surface Neo.”