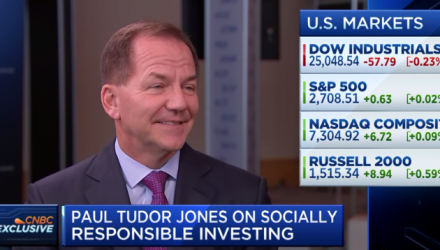 May’s market oscillations certainly gave investors a thrilling ride on the volatility roller coaster and this is exactly what hedge fund manager and philanthropist Paul Tudor Jones saw coming as early as last year. Now, Jones has the prescience to forecast rate cuts instituted by the Federal Reserve.

The investing prowess of Jones was on display as he was able to forecast May’s volatility.

“I think we’re going to see a lot more of what we just saw, which is a lot more volatility,” Jones told CNBC’s Andrew Ross Sorkin during the fourth-quarter volatility in 2018. “It’s really easy to say ‘I’m really bullish’ or ‘I’m really bearish.’ I kind of see a two-sided market.”

How does Jones recommend playing the rate cut? A steady diet of bets on falling interest rates and rising gold could do the trick.