You are at:Home»Innovative ETFs Channel»Is a Bitcoin Breakout on the Horizon? 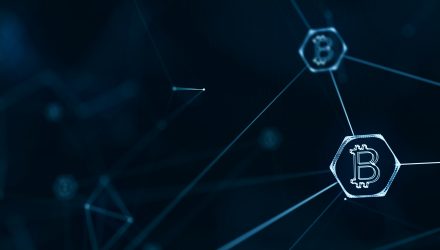 Is a Bitcoin Breakout on the Horizon?

Bonds have been the undisputed champion when it comes to safe-haven assets amid the latest market volatility, but could cryptoassets like Bitcoin be poised for a breakout soon?

“With the equity markets roiling of late, Bitcoin’s been surprisingly quiet,” wrote Brendan Coffey of Forbes. “But the cryptocurrency looks ripe for a breakout soon – one that could vault it toward the all-time highs – or sending it tumbling down to long-term support.”

As of August 25, the leading cryptocurrency was trading above $10,000.

“Since late June, Bitcoin’s meandered between the recent peak around $13,850 and recent low around $9,150 and trading around an increasingly narrow range,” Coffey wrote. “Technically, this has formed a symmetrical triangle, reflecting a rough balance between bulls and bears, without a lot of conviction either way, as the chart here shows.”

However, there could be a technical setup brewing for more price gains.

“Volume’s been declining through the formation of the triangle,” Coffey added. “Volume – as tabulated by data.bitcoinity.org across various crypto trading platforms –  shows about 1.32 million bitcoin trading the week of June 23, when the formation starts, falling to just over 500,000 this past week. This is classic volume behavior with this pattern, again, showing the lack of strong conviction of late of bulls or bears to push prices in one direction or the other. Odds are, that’s going to change very soon.”

The bond markets are flashing a recession signal with the latest inverted yield curve, but the question remains: can cryptocurrencies serve as a safe haven if and when a recession does in fact appear?

The Federal Reserve already factored tail risks in the economy with the most recent rate cut of 25 basis points. Its future rate policies could also affect the performance of cryptoassets like Bitcoin.

“Consumers face the prospect of Central Banks applying aggressive monetary easing with explicit costs to holding cash deposits in banks and restriction of high value banknotes in circulation,” Wilson added. “Assets such as Gold, which has traditionally been held by large investors as an uncorrelated asset hedge, are harder to access as an individual and lack portability. Hence we see this economic environment as being highly positive for digitally scarce crypto assets.”

Bitcoin has been mentioned as an alternative to gold with the moniker, “digital gold.” Does this nickname hold up?

“Scarcity is not enough to be digital gold, despite popular belief,” said Kevin Sekniqi, Co-Founder and Chief Protocol Architect, and Amani Moin, Chief Protocol Architect (Cryptoeconomics) at AVA Labs. “Empirically, at least, Bitcoin does not appear to be a safe haven during times of economic turmoil. This could change as public opinion shifts, but the current data does not support the narrative. Simply put, BTC returns do not meaningfully correlate with any indicators of downturns.”