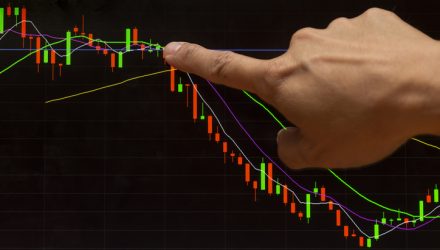 Investors revealed a risk-off mood Wednesday after world central banks signaled a lower rate outlook and trade tensions between the world’s two biggest economies continued to ferment. Many shifted away from riskier stocks and moved into the safety of government bond and gold, the Wall Street Journal reports.

Fueling concerns over possible global weakness from a trade war, policy makers in India, New Zealand and Thailand moved to bolster growth and inflation after cutting interest rates by more than many had expected.

Many also raised bets the Federal Reserve will continue to cut interest rates at its upcoming September meeting after slashing rates just last week. Investors are betting on a 60% chance the Fed will lower rates another 0.75 percentage points by the end of the year, compared to a 8% chance a week ago, according to CME Group data.

The sudden shift to conservative government bonds helped push down Treasury yields and the premium on the three-month bill rates above 10-year note yields was hovering around its most elevated level since March 2007, Reuters reports.

“Whether the U.S. economy is strong enough to withstand the next phase of a trade war is giving people concern right now,” Mike Loewengart, vice-president of investment strategy at E*Trade Financial, told Reuters. “Then we add in what’s at the disposal of the U.S. Federal Reserve, some begin to question whether that tool chest could be depleted much too quicker before we have even encountered a recession.”