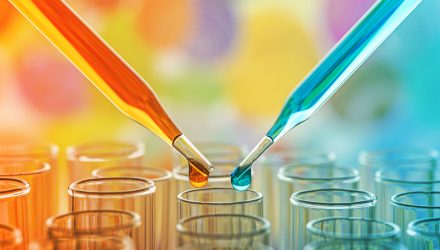 Biotech has had a strong rally since June, when fortune for the sector abruptly pivoted after months of underperformance.

The sector peaked in early 2021 but struggled to continue the momentum, despite numerous tailwinds for the space. Now, however, the biotech sector has rebounded meaningfully, spurred by an uptick in M&A activity among other growth catalysts, bringing a positive outlook for the space.

Rene Reyna, head of thematic and specialty product strategy for Invesco, told VettaFi that before the correction, the Invesco Dynamic Biotechnology & Genome ETF (PBE), the firm’s dynamic biotech and genome ETF, rallied 111% between March 2020 and February 2021, and the Invesco Nasdaq Biotechnology ETF (IBBQ), which tracks the MBI index, rallied 86% during that same period.

“Then you saw this sort of massive correction. You got to a point where just looking at the cash held by the biotech space, that valuation exceeded where they were trading at, and so the second half of the second quarter of this year, we started to see a little bit of reversal,” Reyna said. “PBE bottomed around mid June and we’ve seen a run up about 28%; IBBQ bottomed around June 13 and we saw since then about 25%, so we’ve seen these strong rallies take place.”

Reyna said the reversal is partly to do with biotech having been oversold, as well as a pickup in M&A activity.

“That started to stimulate the marketplace quite a bit and we started to see some momentum,” Reyna said. “It’s been a welcoming environment for the space that really took a while to recover.”

Reyna said that while the space may have a slower grind higher from here, the interest rate environment is going to be a key determinant for the future rate of growth. However, in the near term, biotech’s rally has the potential to continue the fast acceleration seen since mid-June.