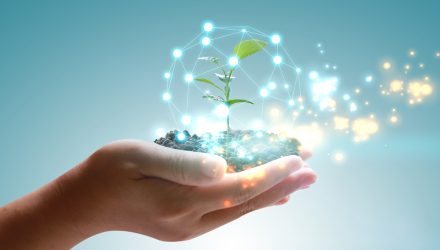 Clean energy stocks began their rebound back in May, with the recent signing of the Inflation Reduction Act into law serving as an additional growth catalyst for the space.

The clean energy industry was already being propelled upward on other strengths prior to the passing of the massive climate, healthcare, and tax bill, making the new legislation “icing on the cake,” Rene Reyna, head of thematic and specialty product strategy for Invesco, told VettaFi.

From the relative bottom on May 12 through August 17, the Invesco Solar ETF (TAN) has increased 50.4%, recouping all earlier losses to post a year-to-date gain of 12.6%, according to YCharts. Invesco’s domestic clean energy fund, the Invesco WilderHill Clean Energy ETF (PBW), has gained 39.4% since May 12.

Reyna said the clean energy rebound started with solar leading the way, with minimal expectations that any climate legislation would be able to be passed.

“We thought we were going to go to the midterms and then kind of have to figure it out – and then lo and behold, Joe Manchin comes around and we get a bill passed,” Reyna said.

Reyna said that since seeing the figures and numbers allocation from the bill, in which solar and wind will be a benefactor, the entire energy complex more broadly has improved. PBW has recently seen strong performance across all segments.

“I think the marketplace is sort of back on board recognizing that this has been the largest initiative from the U.S. in terms of spending, but I think it [also] puts the renewable transition back in vogue. I think investors are recognizing this trend will continue,” Reyna said.

“One thing I think I’ve talked about many times is we’ve always sort of seen it as icing on the cake,” Reyna added. “In other words, the cost dynamics have been very favorable. They’ve been coming down over time. And yeah, we have a short term blip with supply chain and inflation, where you’ve actually seen some of these costs rise, which we haven’t seen in quite some time.”