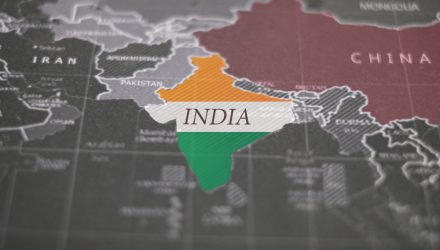 India ETFs Are Rebounding Off the Recent Selling Pressure

India country-specific exchange traded funds were among the few areas in the green Tuesday after bouncing back from the previous session’s broad risk-off pullback following the Federal Reserve’s continued hawkish stance.

Among the better-performing non-leveraged ETFs on Tuesday, the Invesco India ETF (PIN) increased by 1.6%.

The NSE Nifty 50 Index was trading around the 17,500 level Tuesday and previously lost over 800 points after touching a multi-month high of 17,967 in mid-August.

“The sharp pullback we have seen from 18,000 levels has encouraged people to be more risk-on,” Anand James, chief market strategist at Geojit Financial, told Reuters. “Some factors, like the quantum of the U.S. Federal Reserve rate hike going forward, is still on evolving stage.”

“From here on, we will continue to see these kind of blows between the bulls and the bears, as we assess the Fed trajectory,” James added.

Indian markets climbed Tuesday and reversed the decline in the previous session.

Kasat added that investor sentiment also received a bump from a weakening U.S. dollar against major peers, along with a pullback in the crude oil markets.

India is attracting greater attention from foreign investors as many look for opportunities in an uneven global economy.

“Globally, all countries are facing the churn and India seems to be the best-placed jurisdiction in terms of growth and inflation outlook in FY23,” Soumya Kanti Ghosh, group chief economic adviser, State Bank of India said in a report.

“We believe the China story may now be facing clear headwinds and India is likely to benefit from such stark realities over the longer term.”