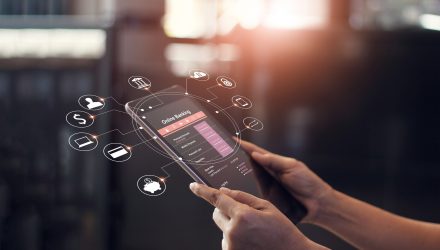 Increasing Use of Mobile Payments Puts Fintech ETFs in Focus

While the best days of the famed FAANG (Facebook, Apple, Amazon, Netflix, Google) stocks may have been missed by investors, it’s important to note where the next growth spurt could be in the technology sector. One area to take note of is the mobile payments sector, which Apple is embracing wholeheartedly.

“During the Q3 earnings call, Tim Cook reported that Apple Pay is completing 1 billion transactions per month, nearly double the amount from a year ago. Much of this growth can be attributed to China,” noted REX Shares president Scott Acheychek in an email.

“According to Bain 10% of U.S. consumers used mobile payments last year, whereas China’s adoption rate is 80%,” he added. “While WeChat Pay and Alipay have a huge lead in China’s mobile payment landscape, Apple Pay has quietly gained 17% market share.”