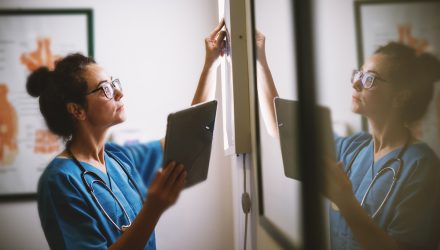 Healthcare stocks and sector-related exchange traded funds took a heavy blow Wednesday, trailing the broader market by a historic margin early in 2019, as political risks on Capitol Hill ramped up.

The sector’s latest drop has been attributed to a number of signs that politicians on both sides of the aisle in Congress are eyeing tighter regulations ahead of the 2020 presidential election, the Wall Street Journal reports.

Insurers have also taken the brunt of the hit and was among the market’s worst performers in recent trading amid uncertainty over the future of the U.S. healthcare policy, with UnitedHealth on pace for its worst month in a decade as the “Medicare for All” mantra weighs on investment confidence.

Democrats in Congress revealed plans for a new federally financed health system that would expand Medicare to cover everyone and overhaul the current Affordable Care Act.

UnitedHealth CEO David Wichmann, who rarely discusses politics, addressed those Medicare for All proposals in a post-earnings conference call Tuesday, CNBC reports. He said the measures would “surely jeopardize the relationship people have with their doctors, destabilize the nation’s health system and limit the ability of clinicians to practice medicine at their best.”

Meanwhile, the Trump administration is looking into costs by requiring healthcare providers to publicly disclose the back-channel prices they charge insurance companies for services. The White House also considered proposals on banning rebates in Medicare that would halt billions of dollars in discounts that drugmakers provide insurers and other companies.

“People don’t want the extra risk that goes along with being in [health-care stocks] right now because of how quickly things can change,” JJ Kinahan, chief market strategist at TD Ameritrade, told the WSJ.

With the increased political risk ahead, many warn of continued volatility in the sector.

“As we get to election season, the rhetoric around health care tends to start heating up,” Kinahan added. “That’s a level of risk you have to be willing to take.”