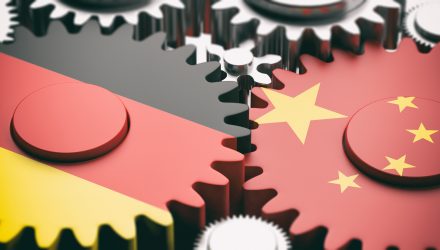 U.S. markets and stock exchange traded funds failed to maintain their forward momentum, swinging to a loss late Wednesday on concerns over the health of the world economy a day  after strong earnings helped lift equities to record highs.

Additionally, analysts were worried that China may slow the pace of policy easing after stronger-than-expected first quarter growth. Meanwhile, traders continued to monitor developments in trade negotiations between Beijing and Washington, which are scheduled to restart next week.

“There are still some one-off events that might affect us, particularly as markets are already expecting some kind of a resolution to the China-U.S. talks,” Ghadir Cooper, global head of equities at Barings, told the WSJ.

First quarter corporate earnings, though, have helped support the risk-on attitude toward equities. The better-than-expected results have helped assuage fears that profits will fall off.

“Earnings expectations were dialed down. It turns out things are much better,” Randy Warren, chief investment officer of Philadelphia-based Warren Financial, told the WSJ. “Markets have the support to go higher.”

Nevertheless, the outlook has been significantly lowered after steep downgrades to 2019 earnings forecasts in recent months.

“Heading into earnings season, there was a lot of fear of earnings contraction and as earnings come out, a lot of that seems to be very unfounded,” Mary Ryan, senior equity options strategist at E*Trade Financial Corp, told Reuters. “Traders are watching earnings very closely to see if the continued surprises can ease some of those concerns, and continue to push these markets into even higher record territory.”