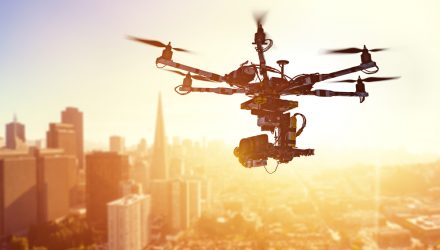 Something odd is happening in the skies of Lake Country, Florida. Drones, like the ones you’ve seen kids playing with at the local park, are zipping through the air.

But these unmanned mini-planes are carrying out a vital service: They’re dropping off medications to seniors in America’s largest retirement community!

The Village is home to 135,000 residents. It’s on “lockdown” because of the coronavirus. So earlier this month, delivery giant UPS teamed up with CVS Pharmacy to deliver prescriptions into The Villages by drone.

These drones can carry parcels weighing 5 lbs. over a distance of up to 25 miles. You can see one floating in mid-air here:

In short, the service allows residents to grab medications without ever leaving their homes. But dropping off antibiotics and aspirin is only the first step.

The “overlord” of America’s skies, the FAA, recently approved UPS Flight Forward as the first-ever drone airline. Let me repeat that: America’s first drone delivery service is up and running!

One that’s been years in the making. If you remember, Amazon founder Jeff Bezos shocked the world on 60 Minutes in 2013.He hinted that within five years, buzzing drones would be crisscrossing the sky with Amazon parcels. Seven years later, the skies are still empty. So what gives?

Drone technology has exploded in the past few years. For example, California-based Zipline runs the world’s largest drone delivery network in Ghana, Africa. It manages up to 600 drone flights per day, transporting vaccines to 2,000 hospitals across the country.

But US government red tape has essentially regulated drone deliveries out of existence. The FAA demands drones must be in the “pilot’s” line of sight at all times while it’s in the air. This makes it impossible to launch a service that could deliver tens of thousands of parcels every day.

The Coronavirus Is Tearing Up The Drone Rulebook

As regular RiskHedge readers know, the coronavirus is likely the most disruptive event in our lifetimes. It’s hitting the “fast forward” button on disruption. Trends that would have taken a decade to unfold are being shoved into a few months.

For example, Microsoft (MSFT) CEO Satya Nadella recently said “we’ve seen two years of digital transformation happen in two months.” And this crisis has forced regulators to do a “180” on drones.

Google’s (GOOG) Project Wing is one of the world’s leading drone makers. And the FAA recently handed it a license to run aerial deliveries in Virginia. In fact, Wing completed 1,000+ “flying deliveries” in the last two weeks. It’s helping local businesses that were forced to close due to the coronavirus reach their customers. For example, Mockingbird Cafe used Wing drones to deliver pastries to residents stuck at home: 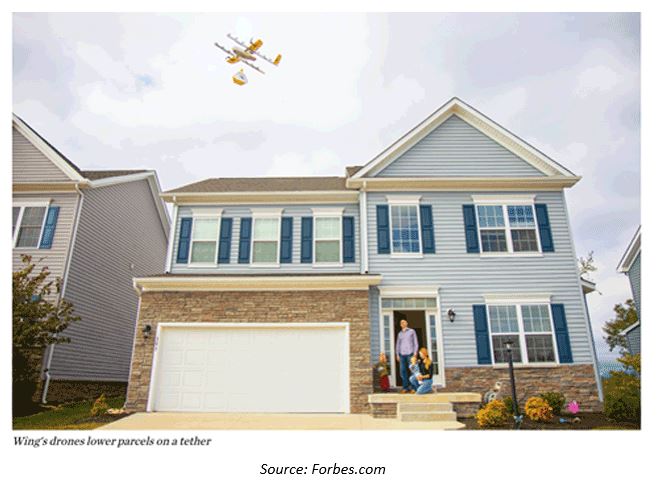 UPS is also using drones to combat the coronavirus. It’s delivered more than 2,000 boxes of medical supplies to WakeMed Health in North Carolina. And get this, the FAA granted UPS a special waiver allowing “pilots” to fly drones out of the line of sight.

This is HUGE. Remember, the FAA’s “line of sight” rules made it practically impossible to launch a drone delivery network.

The Coronavirus Primed Drones For Their “Breakout Moment”

It’s opened up the floodgates. Think about the millions of vulnerable Americans that regularly drive to the pharmacy to collect prescriptions. Few of them are going out right now. Instead, they’re asking family members to grab whatever they need.

As I mentioned, UPS teamed up with CVS to deliver medications to America’s largest retirement community. Why can’t this become the new normal across the US?

The FAA loosening rules opens the door for an “essential service” like medical deliveries. According to Walgreens, 80% of Americans live within five miles of one of its stores. Why couldn’t it build drone “launch pads” on top of its stores to deliver medicines to locals?

Drones will make it possible to deliver things that have never been delivered before. We’ve seen this before with food delivery apps like Uber Eats and Postmates. They allowed restaurants to reach thousands of new customers for the first time. This transformed Chipotle (CMG) into a superstar stock.

Drones make delivery of “odd” items possible. For example, Google’s Wing runs delivery services for coffee shops, and an ice cream store in Australia. As its drones fly from the store to their destination within minutes, ice cream is still frozen, and coffee still piping hot.

These Companies Will Be the Winners

America’s largest online sellers—like Amazon (AMZN) and Walmart (WMT)—will be early winners from this disruption. For example, Amazon spent $38 billion on shipping in 2019. This year, the cost of delivering all those brown boxes is expected jump above $50 billion!

Top consulting firm McKinsey estimates it costs Amazon roughly $4 to ship a parcel today. McKinsey found delivering them by drone would help cut costs by 40% to 50%. Drones will also be a boon for companies that have stores dotted across America—like Walmart. Ninety percent of the US population lives within 10 miles of one of its stores. UPS’s current drones can make a round-trip flight of 25 miles.

So Walmart could soon have the ability to deliver parcels under, say, 10 pounds by drone. And it would be on your doorstep within 30 minutes of clicking the order button. Even a few months ago, the thought of running a drone delivery service in America was “far out.”

But the coronavirus is hastening this disruption. And with the FAA loosening the regulation noose, you can bet the smartest people at Amazon, UPS, and Walmart are asking themselves: “How can we get drones working now?” We’ll likely see drones become a huge part of delivery over the next two to three years.