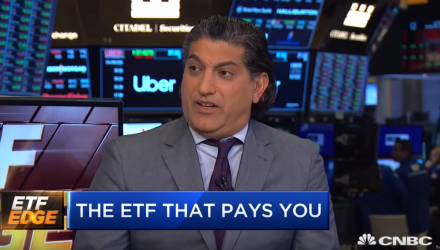 Pushing the exchange traded fund fee war to a new stage, the Securities and Exchange Commission gave the green light for an ETF that pays investors to use it.

Prior to the regulatory ruling, LSLT charged investors a 0.29% expense ratio. Under the new SEC ruling late last week, the ETF structure will apply a 34 basis point fee waiver to the fund’s 29 basis point management charge, essentially bringing the ETF’s annual fee down to negative 0.05%, which means that it essentially pays investors for holding onto the fund.

The Salt ETF issues a rebate that will be capped if the fund reaches $100 million in assets, a critical milestone for for new ETFs that come to market. The offer will continue until the end of next May.

It’s a creative play for an ETF that is at disadvantage when it comes to garnering assets compared to multinational investment banks like JP Morgan who has the ability to tap into its own client capital. Salt’s president and chief operating officer Alfred Eskandar said the company crafted the fee structure after struggling to attract assets to its first ETF.

“David needed a slingshot to take down Goliath — we need a negative fee model to force our way into this anti-competitive market,” Eskandar said.

“New ETF issuers have two choices — they can do their best to survive for the six years it takes on average to get to $100m, or they can do something more drastic that gets them there quicker,” he added.

The industry has found that an increasing number of investors are leaning toward low-cost products as a way to gain market exposure. According to Flowspring, a fund management research company, products with expense ratios below 5bps grew 20 times faster than those above 20bp over the past five years. Fund giants including prominent names like BlackRock, Vanguard, JPMorgan Asset Management, Fidelity Investments and Charles Schwab have been aggressively cutting ETF costs in an ongoing fee war.