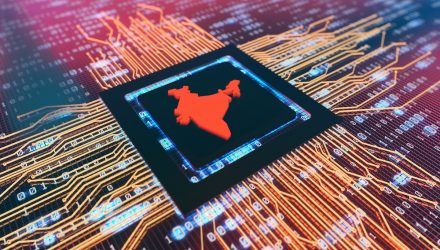 After stumbling last year, the KraneShares CSI China Internet ETF (NYSEArca: KWEB), one of the first exchange traded funds to focus on Internet stocks in an emerging market, is roaring back this year. Much of that rebound is attributable to three well-known Chinese Internet companies: Baidu.com (NASDAQ: BIDU), Alibaba Group Holding Ltd. (NYSE: BABA) and Tencent (OTC: TCEHY), also known as the BATs.

Since inception over five years ago, KWEB is the best-performing China ETF listed in the U.S., according to Bloomberg data. During that span, KWEB is also the top performer among China region mutual funds with track records of at least five years, according to Morningstar.

While KWEB is up about 16% year-to-date, it needs to rally another 11% to reclaim its 50-day moving average, indicating the fund potentially has more upside to deliver.

Trade jitters in the country’s markets could put China in a precarious position if trade wars persist with the United States, However, a white paper published by China last month revealed that the country can economically withstand the effects of a long, drawn-out trade war between the two economic superpowers, but it took extra measures for preparation when the Chinese central bank cut the amount of reserves held by banks.

The BATs “are driving internet revolution beyond their core internet services to an era of artificial intelligence (AI) technology, amongst others. Fitch Ratings believes that M&A will remain opportunistic and regulatory risk will stay manageable. We consider the direct exposure of US tariffs to be minimal for these companies, though weaker consumer spending may indirectly dampen growth prospects,” according to Fitch.