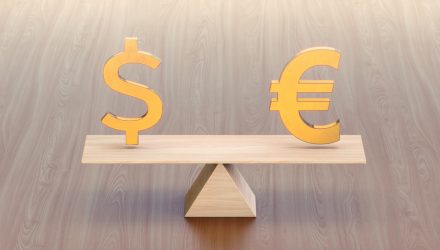 Euro ETF Strengthens After EUR Dips Below Parity Against USD

A euro currency-related exchange traded fund strengthened after the Eurozone currency slipped below parity against the U.S. dollar for the first time in two decades.

The European bloc has been suffering from an energy crisis in response to sanctions on Russia following the attack on Ukraine and threats of further gas reductions to the broader continent. Additionally, the region’s ongoing economic troubles have also weighed on the common currency.

“It is a key and obvious psychological level which is very much under threat here,” Jeremy Stretch, head of G-10 FX strategy at CIBC Capital Market, told CNBC.

Stretch argued that the threat of the euro falling below this level was a reflection of heightened recession fears across the Eurozone.

Furthermore, concerns over a recession have also added to doubt over whether the European Central Bank will have enough room to tighten its monetary policy enough to rein in record-high inflation without worsening the economy.

“The ECB is in a very, very difficult position. You could argue that the ECB has been rather late to the party both in terms of ending their bond purchases but also considering monetary policy tightening,” Stretch added.

The euro, though, regained its footing on Wednesday and broke back above parity against the USD, following data that showed U.S. consumer price inflation surged to a more than four-decade high in June.

Looking ahead, the markets will be watching how the ECB will react as the central bank tries to wrangle in inflationary pressures of its own.

“We expect the euro to steady around the current levels in the next few days after briefly breaching parity,” Robert Mialich, FX Strategist at Unicredit, told Reuters. “Markets will closely watch the next ECB meeting. A credible anti-fragmentation tool will support the single currency. The medium-term outlook remains weak as investors expect the Fed to tighten its monetary policy way more quickly than the ECB.”