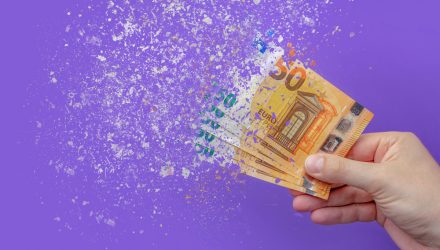 Euro-related exchange traded funds are taking a beating as the Eurozone currency heads towards its lowest level against the U.S. dollar in two decades.

Meanwhile, the euro currency declined 1.5% to $1.0262, or its lowest level since December 2002. The euro has declined over 8% against the greenback this year as record inflation, along with the fallout from the Russia-Ukraine war, weighed on the region.

The euro depreciated to a 20-year low against the USD as investors pared back bets that the European Central Bank will hike interest rates in face of growing recession risks. Some currency traders warned that further pain could come if Russia decides to completely cut off natural gas supplies used for heating homes, powering lights, and running factories, the Wall Street Journal reported.

Some analysts also projected that the euro could dip to parity against the USD. The euro is notably vulnerable due to many European Union members’ reliance on Russian energy. Additionally, there are fears that any sizable ECB rate hike could trigger another Eurozone debt crisis.

“All of this means the euro will fall further and markets are waking up to that,” Jordan Rochester, FX strategist at Nomura Securities, told Reuters. “We are looking for parity and the question is whether that is too small a move or whether it can go lower. We think it can.”

Meanwhile, observers argued that the Eurozone is more likely to slide into a recession than other regions. Nomura anticipated the euro economy to dip into a recession by the third quarter with a total decline in GDP of 1.7%.

“Recession risks and the downgrades to European growth that we are seeing are all driving these (euro) moves,” Grace Peters, EMEA head of investment strategy at JPMorgan Private Bank, told Reuters.