You are at:Home»Innovative ETFs Channel»E-Commerce ETFs Stand Out in the Changing Market Environment 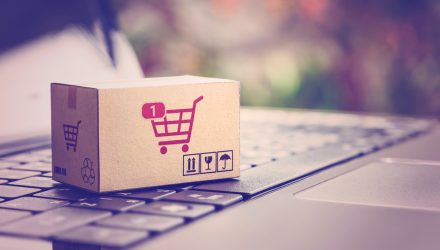 E-Commerce ETFs Stand Out in the Changing Market Environment

An online retail or e-commerce ETF stood out on Wednesday despite the new data the revealed U.S. retail sales suffered through its worst drop on record over March.

The ProShares Long Online/Short Stores ETF (NYSEArca: CLIX) was among the best performing non-leveraged ETFs of Wednesday, increasing 2.3%. CLIX has also increased by 19.8% over the past month, compared to the 6.0% gain in the S&P 500.

To be fair, CLIX tracks the ProShares Long Online/Short Stores Index, which combines two specialized retail indexes into one. It is 100% long the ProShares Online Retail Index, which includes retailers that primarily sell online or through other non-store channels, and 50% short the Solactive-ProShares Bricks and Mortar Retail Store Index that brings together traditional in-store retailers. So, the strategy benefits from the decreased foot traffic to traditional brick-and-mortar shops and from the increased reliance on online sales as more people shop at home.

CLIX stood out from the rest of the consumer segment on Wednesday after new data showed U.S. retail sales plunged 8.7% last month, the biggest monthly drop since the government began tracking the data from 1992.

According to the Commerce Department, the monthly drop in sales was due to heavy declines in spending on clothing and apparel, autos, furniture, and home goods, and restaurants, Business Insider reports.

“Today’s number is one of the first ‘hard data’ reports on aggregate demand in March and reveals the scale of the economic damage wrought by the pandemic last month,” Michael Feroli of JPMorgan said in a note.

However, more businesses are shifting their focus to online sales in a bid to adapt to the changing environment and consumer trends. For example, car dealerships are even switching to a fully online system to help customers select cars at the touch of a button.

“A lot of people refer to it as maybe like the Amazon effect of retailing and it is starting to affect the automobile business a lot,” Garrett Guest, vice president of South Oak Jeep Dodge Chrysler Ram, told CNN.

The Amplify Online Retail ETF (NasdaqGM: IBUY) has been a popular thematic play that targets global companies that generate at least 70% of revenue from online or virtual sales. As the market environment shifts and changes, investors may also have the opportunity to capitalize on the growth potential of the e-commerce segment. Amplify also expanded its line with the Amplify International Online Retail ETF (NYSEArca: XBUY). XBUY is an index-based ETF that takes on foreign companies or those outside the U.S. that are expected to benefit from the increased adoption of e-commerce around the world.

Additionally, the Global X E-commerce ETF (NasdaqGM: EBIZ) reflects the performance of the Solactive E-commerce Index and looks to invest in companies positioned to benefit from the increased adoption of E-commerce as a distribution model, including companies whose principal business is in operating E-commerce platforms, providing E-commerce software and services, and/or selling goods and services online.