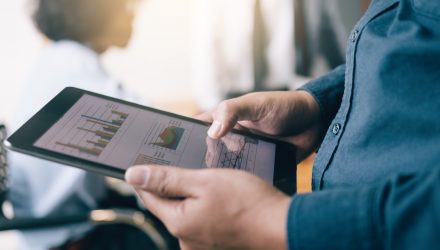 Newly launched ETFs tend to exhibit small assets under management and low on-screen liquidity, but that does not mean a large investor can’t execute a sizeable block trade.

When it comes to exchange traded funds, the perceived on-screen liquidity is not the be-all and end-all indicator of an ETF’s true liquidity.

“If a fund has very little ADV, a large investor can still execute a sizable block in the fund at or often in between the bid-ask spread as long as the underlying basket is liquid. But the smaller investor (or their advisor) often ends up paying the bid-ask spread on the screen, especially if a market order is used,” Tony Barchetto, Chief Investment Officer for Salt Financial, said in a recent note, A Deeper Look at Liquidity in Smaller ETFs.

Barchetto pointed out that despite their ability to transact in size, larger investors are often wary of being the first in to any newer fund as many prefer to wait for smaller investors to aggregate and build up assets first. Meanwhile, smaller investors are generally not as picky by overall fund size but they still need to navigate the problems associated with spreads and on-screen liquidity.

Through a recent study of the ETF universe, Salt Financial found that as assets increase, spreads tend to decline, ADV increases and the number of institutional holders or public 13F filers increase.

“The average spread for funds in the $50-100 million range drops by 5.3 basis points from smallest segment and then another 2.5 basis points after crossing into the $100-150 million range for a total decline of nearly 37%. But then spread costs increase in the $150-300 million bracket before resuming their decline with higher asset levels but at a slower rate. However, a handful of funds in the $150-300 million bracket with unusually large spreads skewed the data. A look at the median spread in basis points for each segment reduces the impact of these outliers, showing a more consistent decline in spread cost with asset level,” Barchetto said.

However, it should be noted that the implied liquidity paints a different picture. The average implied liquidity in the $0-50 million ETF bracket is over $2 billion, or much higher than most of the middle AUM range, which suggests many smaller funds do have very liquid underlying baskets but just have low levels of daily trading activity.

When weighing the merits and total cost of ownership for ETFs, Salt Financial argued that if the underlying securities in the fund are generally liquid and the expense ratio is attractive, a one-time 5 to 10 basis point cost to access a differentiated strategy with the potential to outperform is a small price to pay.

“If enough investors make that leap, the data suggest that 5-10 bps spread will begin to shrink with even a modest boost in assets,” Barchetto added.

Nevertheless, when investing in any ETF, Salt Financial still believes that investors should utilize limit orders to have better control over their trades and potentially help investors execute at prices better than the bid or offer.