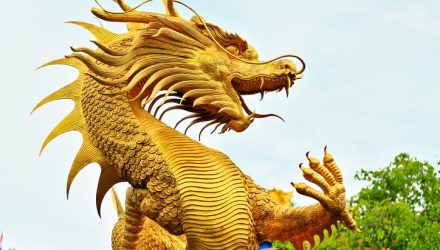 China Technology ETFs Could Benefit the Most from Phase One Deal

As the U.S. and China move toward reconciliation, Chinese technology stocks and sector-related exchange traded funds could be among the top winners in in a phase one trade deal.

Morgan Stanley has highlighted 29 Chinese stocks that are most likely to benefit from the completion of a phase one deal between the U.S. and China, and almost half of them include information technology names, which have been weighed down by increased trade barriers, followed by consumer sector, CNBC reports.

“These two sectors saw the biggest scale of valuation re-rating based on their previous reaction to de-escalation events,” Morgan Stanley said in a note.

Investor optimism over trade has risen after U.S. President Donald Trump said he had “a very good talk” with Chinese President Xi Jinping about the phase one trade deal. Both sides are expected to sign an agreement in the following month.

“We believe IT/Internet-related and Transportation stocks will benefit the most from any de-escalation of trade tensions – IT and Internet due to their exposure to tariff impacts and technology bans, while Transportation stocks, especially Airlines, should benefit from an improved global trade outlook and strengthened CNY/USD,” Morgan Stanley added.

However, Morgan Stanley did warn that the positive outlook is largely based on the dynamics between the U.S. and China, or the actual signing of a deal. Investors have been burned before as the two largest economies tried and failed to sign in a deal in the past 18 months.

Nevertheless, for those who believe a trade deal will be signed, ETF investors can consider a technology-focused China country-specific exposure. As a way to help investors hone in on the China tech segment, Invesco offers a line of China country-specific ETFs, including the focused Invesco China Technology ETF (NYSEArca: CQQQ). CQQQ is based on the AlphaShares China Technology Index, which is designed to measure the performance of the investable universe of publicly-traded information technology companies open to foreign investment that are based in mainland China, Hong Kong or Macau.

Additionally, investors can look to other options such as the Global X MSCI China Information Technology ETF (CHIK), which tries to reflect the performance of the large- and mid-capitalization segments of the MSCI China Index that are classified in the Information Technology Sector as per the Global Industry Classification System, and the KraneShares CSI China Internet Fund (NasdaqGM: KWEB), which tracks a portfolio of Chinese internet and internet-related companies.