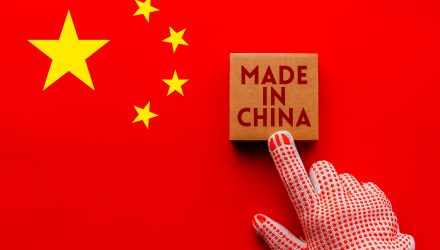 Chinese factories showed a marked increase in activity, according to the official purchasing managers index released Sunday. The index rose to a six-month high of 50.5 during the month of March–from 49.2 in February, which bested economists’ forecasts.

“We don’t see a reason why the global economy can’t continue to advance at a slow and steady pace,” said Craig Birk, chief investment officer at Personal Capital.

In addition, China is becoming less resistant to safeguarding its businesses, which will open the pathways to more foreign investment. China ETFs have also been the beneficiaries of index provider MSCI Inc. announcing recently that it would quadruple its weighting of large-cap Chinese shares in its benchmark indexes.

A recent MSCI Inc. press release said the index provider would increase the weight of China A shares by upping the inclusion factor from 5 percent to 20 percent.

“There are a lot of companies on mainland China that just recently, because Chinese laws have loosened up, that have allowed investors outside of the U.S. to invest in Chinese stocks,” said ETF Trends CEO Tom Lydon.

As such, one ETF to consider is the Xtrackers Harvest CSI 300 China A ETF (NYSEArca: ASHR) as a way for investors to gain exposure to China’s biggest, best and most authentic equities. ASHR was up 0.5 percent on Monday and up 31 percent YTD.

“This is the best way to actually get into China and invest in real companies that are not state-owned,” said Lydon.