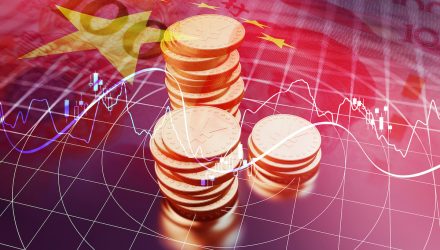 A China ETF Becomes a Go-To Play for Global Bets

China, the second largest economy in the world, is being closely watched as a major engine of growth, so it is no surprise that many traders are looking to a China ETFs as a way to play the global outlook.

Strategists are pointing to options on FXI as a cheap way to play the global markets as a number of concerns cut down $5 trillion from U.S. equities over the fourth quarter meltdown. Options activity on FXI has surged to a three-year high and remains elevated, reflecting the ongoing demand for traders seeking to hedge their investments.

“Our known unknown, and, in our view, the only genuine threat of recession in 2019, is the U.S.-China trade dispute and China’s worsening slowdown,” Brad Tank, Neuberger Berman Group LLC’s chief investment officer for fixed income, said in a note.

As the world’s second-largest economy slows, many bought puts on FXI in a straightforward play to hedge the slowdown in China and problems in global trade, Vinay Viswanathan, strategist at Macro Risk Advisors, said. Furthermore, FXI, which tracks mainland companies listed in Hong Kong, was also a way to play the broader risk-off sentiment associated with the pullback in U.S. stocks.

Nevertheless, there are some turning more bullish on the China outlook. Goldman Sachs Group Inc. strategist Rocky Fishman offered a more optimistic take on China trade in a note last week, suggesting bargain hunters could look to cheap FXI calls in order to position for a positive resolution to the tariff dispute.