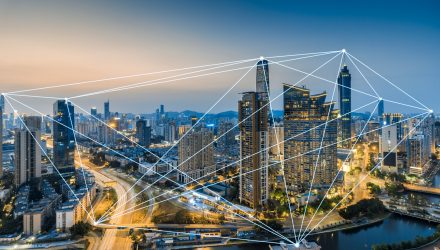 A China ETF to Capitalize on Increased Blockchain Technology Adoption

While the capital markets are waiting for a U.S.-China trade deal to present itself, there are other ways to capitalize on the Chinese economy and one way is through the growing adoption of blockchain technology via the Reality Shares Nasdaq NexGen Economy China ETF (NasdaqGM: BCNA).

Chinese E-commerce giant Alibaba is one of the major movers and shakers who are adopting more uses for blockchain, which is the underlying technology responsible for cryptocurrencies like Bitcoin. As financial technologies become more robust, Alibaba is adjusting with the times through its payment arm Ant Financials

“We are the most patented company in the world of blockchain technology,” said Jing Xiandong, Ant Financial CEO.

BCNA seeks long-term growth by tracking the investment returns of the Reality Shares Nasdaq Blockchain China Index, which is comprised of blockchain-related companies located in Hong Kong and mainland China. The index is designed to measure the returns of companies that invest in or utilize blockchain technology.

“China is quickly becoming a global epicenter for blockchain innovation. In 2017, the nation filed for more blockchain-related patents than any other country in the world1, and the Chinese government recently endorsed blockchain technology as an economic ‘breakthrough,’” said Eric Ervin, CEO of Reality Shares in a press release. “China’s blockchain industry presents an incredibly exciting and long-term investment opportunity, and through BCNA, investors can now easily access this emergent market.”

Furthermore, blockchain experts are expecting Asia to lead the charge in blockchain technology with new developments in the making, according to 500 Startups Partner Edith Yeung. One area in particular is in payment processing.