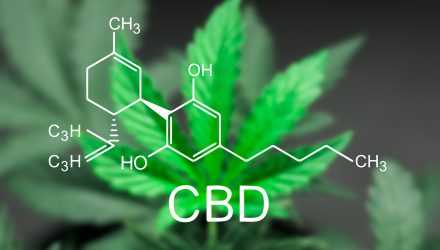 CBD Growth Could be a Long-Term Catalyst for Marijuana ETF

Up nearly 45% this year, the ETFMG Alternative Harvest ETF (NYSEArca: MJ) is one of 2019’s best-performing non-leveraged exchange traded funds.

Indeed, increased legalization of cannabis, be it medicinal or recreational, is a major catalyst for MJ and cannabis stocks, but another catalyst could be a major growth driver for this market segment: the cannabidoil (CBD) market.

“The CBD market could represent a $16-billion opportunity by 2025, according to a report issued Monday by a team of Cowen analysts,” reports ETF Daily News. “The findings are based on a roughly 40-percent increase in consumer incidence with the average user spending $640 — or less than $2 per day — each year.”

In the U.S., MJ is getting a lift from speculation that more states will legalize marijuana for either recreational or medicinal use and that Congress and the White House could soften their stances on the drug being illegal at the federal level. California, Colorado, Nevada and Washington are among the states with thriving legal cannabis industries.

Cowen believes “CBD use will grow 10 percent among adults, totaling around 25 million consumers by 2025,” according to ETF Daily News.