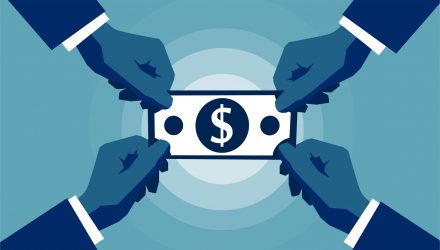 Company stock repurchases just hit its fourth consecutive quarterly record, the longest streak in at least two decades. Investors can also look to exchange traded funds that focus on the buyback strategy if the pace of repurchases continues.

The S&P Dow Jones Indices announced preliminary Q4 2018 S&P 500 stock buyback numbers of $223 billion, which marked the fourth consecutive quarterly record, the longest streak in the 20 years SPDJI has been tracking buybacks. The previous record of $203.8 billion was set during Q3 2018 and the Q4 number was a 62.6% jump from the $137.0 billion reported for Q4 2017.

The record buybacks came in while stock prices declining an average 5.3% over Q4 2018, which only further increased the number of shares that companies could repurchase for the same amount of capital. Consequently, the percentage of companies that substantially cut share counts of at least 4% year-over-year surged to 18.8%, compared to the prior quarter’s 17.7% and Q4 2017’s 15.1%, bolstering earnings-per-share results.

“Buybacks were again favored over dividends in both the rate of growth and aggregate dollars spent,” Silverblatt added. “Companies continued to spend more of their tax savings on these share repurchases as they boosted earnings through significantly reduced share counts. Adding to the share reduction, and therefore the EPS impact, was Q4’s stock price decline, which permitted companies to buy even more shares for their dollars and reduce share count more efficiently.”

Gross values are not adjusted for float

As more companies look to add value through share repurchases, ETF investors can also capitalize on the potential opportunity through buyback-themed ETF strategies.

PKW includes a broader selection of U.S. companies that have effected a net reduction in shares outstanding by 5% or more in the trailing 12 months. SPYB focuses on S&P 500 companies with the highest buyback ratio in the past 12 months. DIVB is comprised of U.S. stocks with a history of dividend payments and or share buybacks where holdings include those with the largest dividend and buyback programs in the market measured by dollar value.

For more information on the buybacks strategy, visit our buybacks category.