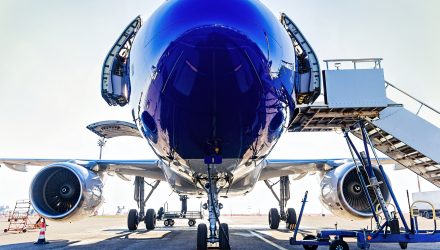 The iShares U.S. Aerospace & Defense ETF (Cboe: ITA) was among the better performers on Thursday, gaining 1.1%.

Boeing told suppliers it will resume production on its best-selling 737 jets at a rate of 52 aircrafts per month in February 2020 before ramping it up to a record 57 jets monthly in June, Reuters reports. The resumption of 737 production will be contingent on regulator’s approval of the airplane to fly again commercially in the fourth quarter.

The 737 MAX has been under heavy scrutiny after deadly crashes killed almost 350 people in Ethiopia and Indonesia over a five month time frame.

“While the assumption reflects Boeing’s best estimate at this time, the actual timing of return to service will be determined by the FAA and other global aviation regulatory authorities and could differ from this assumption and estimate,” Boeing spokesman Paul Bergman told Reuters.

The new U.S. Air Force contract will set the company to produce a maximum of 112 wing sets and spare kits. Boeing previously delivered 173 enhanced wing assemblies under a prior contract.

“Our established supply base, experience with the A-10 structures, and our in-depth knowledge of the U.S. Air Force’s requirements will help us deliver high-quality wings to meet the customer’s critical need,” Pam Valdez, Boeing’s vice president of Air Force Services, said in a news release.