You are at:Home»Innovative ETFs Channel»Bitcoin May Not Need an ETF to Rally This Year 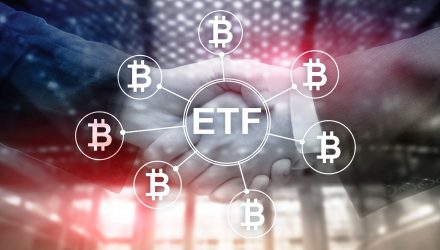 Bitcoin May Not Need an ETF to Rally This Year

An ETF tied to bitcoin has yet to be approved by U.S. regulators, but some crypto market observers that approval is not necessary for the largest digital currency by market capitalization to trade higher this year.

In 2018, bitcoin shed almost 80% of its value. Among the issues plaguing bitcoin; last year were the ongoing unwillingness of U.S. regulators to approve bitcoin-related exchange traded funds as well as data indicating that mainstream acceptance and adoption of the digital currency are declining.

Tom Lee of Fundstrat Global Advisors, a noted bitcoin bull, recently said he does not expect the Securities and Exchange Commission (SEC) to approve a bitcoin ETF this year, but added that he expects the digital currency to trade significantly higher than where it currently resides. At this writing Monday, bitcoin traded around $3,860.

“Lee noted that stock markets rallying after December’s downturn is likely to be a positive catalyst for the flagship cryptocurrency, likely referring to the ‘risk-on’ nature that BTC currently holds,” reports Blockonomi. “The Fundstrat co-founder added that the weakening performance of the U.S. dollar could also be a ‘real tailwind’ for Bitcoin, as USD’s status as a global reserve asset and a stable store of value could come under fire.”