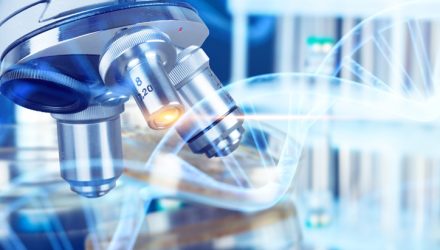 Investors continued to yank money out of biotechnology sector-related ETFs for the seventh consecutive week, the longest back-to-back weekly selling since late 2017.

The healthcare and biotech fund group saw $488 million in net outflows, or 0.7% of their assets, for the week ended October 2. In comparison, the “all equities” category saw a 0.1% drop in total assets.

For instance, the iShares Nasdaq Biotechnology ETF (IBB), the largest biotech-related ETF by assets, experienced $123.3 million in net outflows over the past week, according to ETFdb data.

The SPDR S&P Biotech ETF (XBI), which follows a more equal-weight indexing methodology, stood out as it attracted $13.8 million over the past week, which suggests that some investors may be stepping back in and focusing on some of the mid-sized or smaller players in the biotech space.

Outflows Have Gone On

Nevertheless, the outflows have gone on since mid-July, and over the past seven weeks, investors have pulled $2.6 billion out of this ETF segment, which represents the longest unbroken stretch of outflows since November 2017.

The biotech segment and broader healthcare sector have also underperformed the broader market as investors exited positions in response to growing discourse over policy proposals aimed at reducing drug prices in Washington. While some argued that impeachment talks might have drawn politicians’ attention away from the drug pricing issue, scrutiny is unlikely to relieve the pressure.

Goldman Sachs analysts led by Terence Flynn also previously warned that the topic of drug pricing could continue to overshadow the sector. Looking ahead, Goldman highlighted several negative factors that could weigh on the sector, including a Senate Finance bill, House Speaker Nancy Pelosi’s drug pricing bill, Trump’s plans for an international drug pricing index, and proposed changes to Medicare’s Part B.