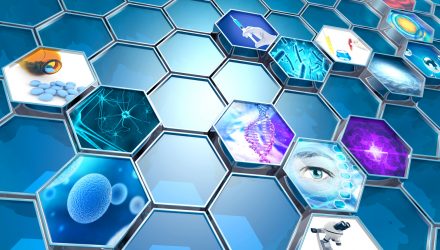 Biotech ETFs Are Breaking Out on Pfizer’s Array Biopharma Deal

The largest U.S. drugmaker is paying a 62% premium on Array Biopharm to access the small biotech’s approved treatments for skin cancer, along with its other experimental drugs, CNBC reports.

Array Biopharma shares advanced 56.6% on the acquisition announcement. ARRY is SBIO’s largest component holding, accounting for 6.3% of the ETF’s portfolio.

Under the new Chief Executive Officer Albert Bourla, Pfizer has been looking into ways to diversify its drug pipeline as its blockbuster pain drug Lyrica loses patent protection and faces increased competition among other generics providers.

”(The acquisition) sets the stage to create a potentially industry-leading franchise for colorectal cancer alongside Pfizer’s existing expertise in breast and prostate cancers,” Bourla said.

The acquisition is also seen as a way for Pfizer to achieve its “15 in 5” goal of launching 15 experimental treatments, each with at least $1 billion annual sales potential, over a five-year period, which has pushed the drugmaker to invest heavily in cancer drugs and gene therapies.

The new revelation on ARQ 092 comes just one trading day after management unveiled promising data for its ARQ 531 concoction in treating cancers affecting white blood cells, which helped shares increase over 44% on that update.