You are at:Home»Innovative ETFs Channel»Biogen Could Send Biotech ETFs on a Wild Ride 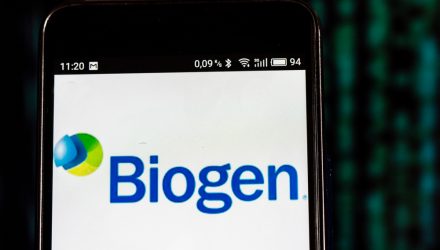 Biogen Could Send Biotech ETFs on a Wild Ride

Biotechnology sector-related exchange traded funds are in for a wild ride as Biogen (NasdaqGS: BIIB) is set to receive a verdict from the Food and Drug Administration on its Alzheimer’s drug.

Biogen shares are already up 5.8% on Friday ahead of the FDA’s decision.

The FDA is expected to make its decision on Biogen’s Alzheimer’s drug on Monday in what a JPMorgan Chase & Co. analyst called “the mother of all binary events”, which could send BIIB shares veering sharply in either direction, Bloomberg reports.

Wall Street analysts project that if the Alzheimer’s drug gains FDA approval, BIIB shares could surge to as much as $450 from its current $288 share price. On the other hand, Biogen shares could plunge to $200 if the treatment doesn’t pass muster, according to Cory Kasimov, the JPMorgan analyst who follows the company.

“Buckle up for what’s likely to be a very important month for biotech investing,” Kasimov said in a research note.

The wide disparity between the the positive and negative outlook on Biogen’s shares reflects the company’s intimate tie to the potential blockbuster drug, the first that’s believed to slow the progression of Alzheimer’s disease for those who show early signs of cognitive impairment.

“The data package is insufficient, and with almost any other indication, we suspect regulators would be asking for another confirmatory trial pre-approval,” Kasimov said in a note.

“But this isn’t any other indication. It’s Alzheimer’s. And the unmet need is rather unprecedented,” he added. “It’s anyone’s guess as to what happens next.”