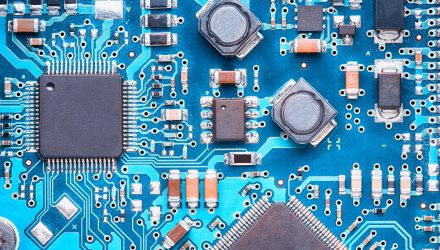 The bulk of earnings reports expected to affect semiconductor stocks and the relevant exchange traded funds are still to come, but chip ETFs, such as the VanEck Vectors Semiconductor ETF (NYSEArca: SMH) and the iShares PHLX Semiconductor ETF (NasdaqGM: SOXX), could face other tests this week.

After languishing last year, semiconductor stocks are showing some signs of life early in 2019. To start the new year, SMH is up more than 3%. SMH currently resides around $90, prompting some traders to speculate about the ETF’s fortunes as it nears the psychologically and technically significant $100 area.

“Options traders in the January series have piled on to underscore the significance of triple-digit territory for SMH, having accrued call open interest totaling 24,139 contracts at the 100 strike,” reports Schaeffer’s Investment Research. “This establishes the SMH January 100 call as not only the second-biggest front-month strike, but the ETF’s second-biggest open interest strike overall.”

Investors could be paying up for future catalysts for semiconductor and broader technology names. If there is a silver lining for the rising valuations on chip stocks it is that some industry observers believe the group’s valuations should not be measured in the traditional sense because of the evolution of the semiconductor business.

“Underfoot, meanwhile, we have the January 85 strike — home to peak front-month (and overall) open interest of 32,747 puts in the monthly series expiring at the end of this week,” according to Schaeffer’s. “This heavily populated put strike is just a few points north of the 160-week moving average, at $82.60, which chip stock bulls are hoping has once again marked a low for the shares, in what would represent a repeat of this trendline’s role in August 2015 and the early months of 2016.”