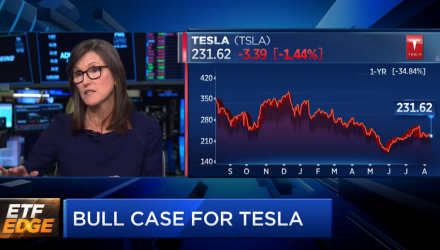 During CNBC’s “ETF Edge” on Monday with host Bob Pisani, ARK Invest CEO Cathie Wood discussed Tesla Inc. (TSLA). Pisani started the segment by pointing out that Tesla has had a tough year, noting that Wood had been a fierce defender of Elon Musk’s company.

Wood noted how her enthusiasm stemmed from Tesla’s gross margins potentially going up, if the pricing remains where it is in the Model 3, from 17% to 30% this year.

“We’re pretty excited about Tesla,” Wood said. “We think the negative sentiment is pretty unbelievable. And, you know what, it is disingenuous, at best, for those who think Google’s Waymo should be worth $45 to $65 billion, when Tesla is so far ahead.”

Pisani pointed out Tesla’s market cap had been cut in half in a year, and then starting to come back, which showed how the market doesn’t have a proper understanding of how to value the company. Wood responded, noting how this showed another difference between the tech and telecom bubble, where investors looked to the future, instead of the past.

She also discussed how most of the auto companies that make up holdings of the iShares Self Driving EV And Tech ETF (IDRV) will likely disappear or be absorbed by some bigger tech company.

“Tech companies are going to dominate autonomous, and it’s really unbelievable that Tesla is not in the top ten,” Wood adds.