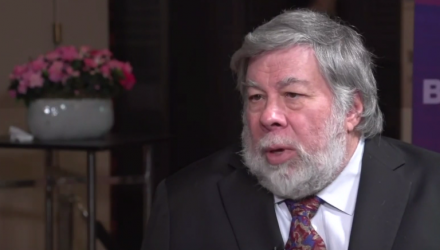 The future of tech could result in more pocket space as Apple co-founder Steve Wozniak sang the praises of the iPhone maker’s technological advancements with mobile devices, but cited one missing feature: the ability to fold.

“Apple has been a leader for quite a long time in a few areas such as touch ID, facial ID, and easy payment with the phone,” Wozniak said in a Bloomberg TV interview. “They’re not the leader in areas like the folding phone, and that worries me because I really want a folding phone.”

Wozniak may have been alluding to competitors like Samsung Electronics Co. and Huawei Technologies Co revealing phones that can fold–the Galaxy Fold and the Huawei Mate X, respectively.

Related: iPhone 11 Casing May Have A “Frosted Glass” Look

Microsoft (MSFT), Apple Inc (AAPL) and Amazon (AMZN) combine for about a quarter of QQQ’s weight.

Wozniak was effusive in his praise of the direction that the iPhone maker is heading. Apple is looking to explore other opportunities outside its core business of mobile devices–the iPhone in particular.

Apple might want to consider upping the ante on its Apple TV as Wozniak still prefers using a Roku player.