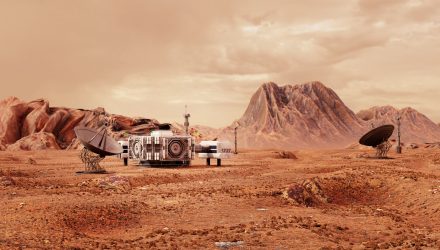 An ETF to Watch as NASA Backs Autonomous Space Habitats

Tesla CEO Elon Musk has already been touting the idea of establishing a livable colony on Mars and now, the National Aeronautics and Space Administration is ready to fund autonomous space habitats that will provide support to astronauts during exploration missions.

NASA’s idea is the creation of a multi-university Space Technology Research Institute called Habitats Optimized for Missions of Exploration (HOME). The goal of HOME is to advance the design of autonomous systems for space habitats.

“Space is harsh and errors can be catastrophic, so we need autonomous systems that are very good,” said Mario Bergés, associate professor of civil and environmental engineering (CEE), who is leading the Carnegie Mellon University research team working under the auspices of HOME.

“How do you conduct automated fault detection and diagnosis without a lot of system data? This is where AI comes in,” Bergés said. “We have machines that learn by themselves if you give them enough data, but we don’t have a lot of machines that can reason by using existing engineering knowledge, which can reduce the amount of data they need.

Artificial intelligence and machine learnings is already making its way into other sectors and it’s only fitting that space exploration also gets touched by the technology. If the goal is to eventually have humans living elsewhere other than the Earth, autonomous systems can help make that a reality.

“Since the beginning, civil engineers have been the stewards of the infrastructure that supports modern life,” he said. “If humanity is moving into space, it makes sense for civil engineers to be part of that.”

NASA’s funding is something that can help fuel the Procure Space ETF (NYSEArca: UFO) to future gains. In an ETF landscape that has over 2,000 funds for investors to choose from, it’s important to have product differentiation in this quest for assets under management like UFO–the world’s first global ETF to give investors pure-play access to the expanding space industry.