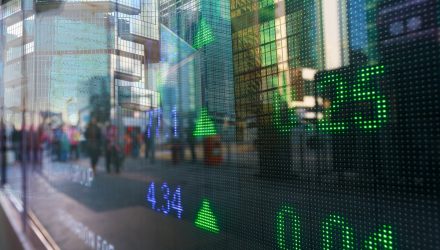 Risk-on sentiment has been renewed as the upbeat earnings season, hopes of an end to the U.S.-China trade tiff and a more patient Federal Reserve stance on interest rates have helped prop up equity markets, with both the S&P 500 and Nasdaq Indices breaking above their record closing highs in intra-day action.

“It’s almost like the market is calling a mulligan on what transpired in the fourth quarter,” Michael Baele, senior portfolio manager at U.S. Bank Private Wealth Management, told the WSJ. “The reality of the Fed pushing rates higher and the potential for tariffs biting world trade sank in then, and the market turned manic, but now all of those concerns have lifted.”

Among the stand out names on Tuesday, Twitter (NasdaqGS: TWTR) shares surged and was trading near a nine-month high after the social media platform revealed better-than-expected quarterly revenue and a surprise increase in active users.

“As we get closer to reaching all-time highs people get a little more interested. There has been a lot of money sitting on the sidelines and that has been drawn in because of the fear of missing out,” Robert Pavlik, chief investment strategist and senior portfolio manager at SlateStone Wealth LLC, told Reuters. “Earnings have certainly helped, we’ve seen some pretty good earnings reports and that is helping turn sentiment around.”

While the earnings surprises have helped, analysts expect profits of S&P 500 companies to dip 1.3% in the first quarter year-over-year, which would mark the first earnings contraction since 2016, but forecasts have been upwardly revised.