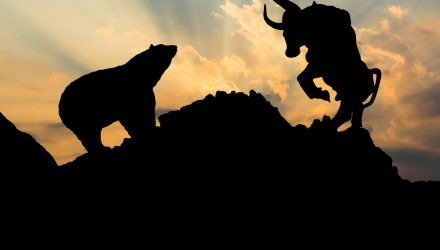 2 ETFs to Capitalize on U.S. Dollar Bullishness or Bearishness

With rising rates on the horizon, that should spell bullishness for the U.S. dollar, but ongoing market influences could easily turn that tide. That said, investors can get tactical exposure to the U.S. dollar with a pair of funds from Invesco.

Geopolitical influences are starting to move the dollar as of late. Those same geopolitical forces are also adding a heavy dose of volatility to the stock markets, which is pushing investors to safe haven assets like the dollar.

In particular, the contentious situation at the Russian-Ukrainian border is pushing investors towards the safe confines of the U.S. dollar. As investors closely watch that situation, a flurry of demand for the greenback could result if the situation escalates further.

“A Russian attack could begin any day and would likely start with an air assault, White House national security adviser Jake Sullivan told a media briefing,” a Reuters report said. The dollar had been trading mostly sideways when the U.S. warning hit markets. The dollar index, a measure of the greenback against six major currencies, rose 0.258%.”

That said, investors can err on the side of bullishness with the Invesco DB U.S. Dollar Bullish (UUP) to capture the dollar’s upward momentum. UUP tracks the price movement of the U.S. dollar against a basket of currencies, including the European Union’s euro, the Japanese yen, the British pound, the Canadian dollar, the Swedish krona, and the Swiss franc.

Getting Bearish on a Less Hawkish Fed

The beauty of having a corresponding inverse fund is the ability to capture gains in an asset that’s going down as much as it’s rising. Rising rates are pushing the dollar higher, but should the recovery from the pandemic happen slower or rising inflation causes stagnant growth, a bearish dollar could happen.

If that bearishness plays out, then it’s an ideal opportunity for the Invesco DB U.S. Dollar Index Bearish Fund (UDN). It essentially does the opposite of UUP, giving investors a chance to capture the greenback when it languishes.

Right now, it’s the bulls with the slight lead, with UUP up just 0.35%. The disparity is apparent in the performance chart, showing where tactical investors can play the peaks and valleys in the dollar’s valuation.