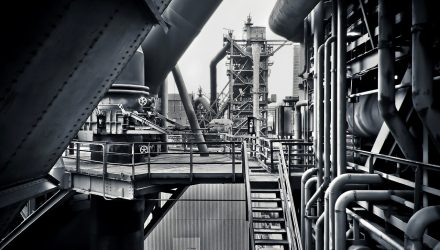 Additionally, some technical analysts are concerned the sector be on the cusp of a significant bearish reversal.

Fundstrat technical analyst Rob Sluymer “writes that the XLI is reversing the relative performance uptrend that began in early 2016—and the trend is not limited to the big players, as the equal-weighed PowerShares S&P 500 Equal Weight Industrials Portfolio (RGI) also reversing its uptrend (relative to the S&P 500) in the past two years,” reports Teresa Rivas for Barron’s.

Industrials perform well when interest rates rise because rising rates can go hand-in-hand with economic growth. Increased infrastructure spending is also seen as a catalyst for industrial stocks and ETFs. However, the sector’s recent performance indicates industrials are disappointing at a time when the sector should be thriving.

“These breaking trends, led by industrials, along with a bottoming U.S. dollar, are ‘further indications that the four-year cycle that began in early 2016 is showing evidence of maturing.’ Sluymer writes that while the S&P 500 appears to hold its support at 2016-2018 uptrend levels and 200-day moving average, leadership is shifting, with cyclical, dollar-sensitive groups incrementally weakening, as domestic groups improve,” according to Barron’s/