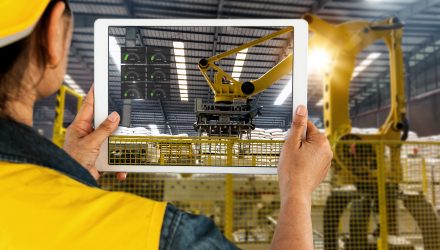 The Industrial Select Sector SPDR (NYSEArca: XLI), the largest exchange traded fund tracking industrial stocks, is down about 3% year-to-date while the S&P 500 is modestly higher. That may not seem like a big deal, but the industrial sector is lagging the broader market by the widest margin seen year, potentially spooking investors about the health of a once favored cyclical sector.

Other Offenders Weighing on Industrial ETFs

Boeing is not the only marquee industrial that has been weighing on industrial ETFs in recent days. Another Dow component, Caterpillar Inc., has been doing the same.

XLI’s “biggest losses came April 24, when Caterpillar Inc. Chief Financial Officer Brad Halverson threw cold water on the company’s robust first-quarter results by saying they constituted the ‘high water mark for the year,’” reports Bloomberg. “That spurred concern the growth cycle has peaked, boding ill for industrials in particular. This is a cyclical sector that tends to perform well amid periods of strengthening global growth.”

Related: How to Find the Best Value in Defensive Sectors