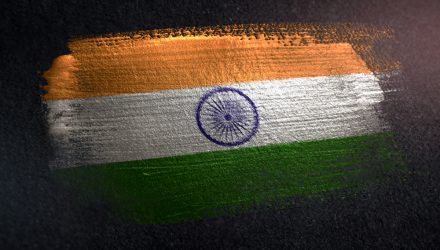 India exchange traded funds have been rallying as investors look past the short-term Covid-19 crisis and consider long-term growth potential.

Over the past month, the iShares MSCI India ETF (CBOE: INDA) increased 7.7% and the WisdomTree India Earnings ETF (NYSE: EPI) has advanced 9.2%.

The MSCI India index has gained 10.6% so far this year, outperforming the broader emerging markets gauge, which is up 4.9%, the Wall Street Journal reports.

“There is a huge cognitive dissonance between what markets are doing and what the far-more-dire reality is on the ground,” Vishnu Varathan, head of economics and strategy at Mizuho Bank, told the WSJ, adding that India’s stock indices reflected the performance of very large, well-connected, and usually financially strong companies.

While growth expectations have been lowered, Varathan still projected the economy to expand by 6.8% to 7.8%.

“India’s economic recovery will be at least delayed, if not diminished,” Varathan said.

India is still grappling with high coronavirus cases, which have topped 27.5 million infections and over 318,000 deaths, according to Johns Hopkins University data.

Nevertheless, investors have interpreted the second wave of infections to likely be “a near-term setback rather than a very long-lasting slowdown in economic activity,” Hiren Dasani, co-head of emerging markets equity at Goldman Sachs Asset Management, told the WSJ.

The economy could find support from reforms and stimulus measures. Prime Minister Narendra Modi enacted a series of economic reforms that cover the labor markets and farming. The government is also trying to privatize state-owned enterprises and bolster manufacturing by offering incentives to make cars, drugs, phones, and other products in India.

“All of these [measures]are going to have a longer term impact in terms of India’s productivity and competitiveness,” Dasani added.

International investors have jumped into India’s markets and are sticking around, despite the current tragedies. Foreign investors have thrown $5.6 billion into Indian equities so far this year, according to Refinitiv, although the amount dropped by about $3.0 billion from a peak in late March.

“The structural growth opportunities in the medium-term are likely not going to be altered too much by the second wave,” Jeff Kilkenny, portfolio manager at Principal Global Equities, told the WSJ.