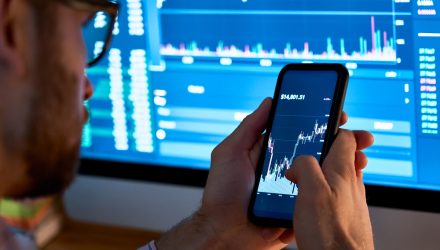 Stock pickers just suffered one of their worst months in over two decades, underscoring the benefits of low-cost passive or index-based exchange traded funds.

After the two-month market pullback to start off the year, many actively managed funds shifted to a defensive positioning through overweight cash and bearish bets on a further decline, Bloomberg reports. However, these active managers were caught on the wrong side of the trade after a swift rally in the second half of March.

Consequently, according to Bank of America Corp. data, long-only mutual funds underperformed benchmarks on average by a full percentage point in March, the worst performance since 2002.

Hedge funds that take both bullish and bearish equity bets were also on the wrong end of the trade after cutting back stock exposure to new lows. Meanwhile, many were forced to cover short positions as the market rebounded and then not add to any more long positions. Consequently, the group experienced flat returns for the month ended March 29, according to Goldman Sachs Group Inc.’s prime broker. In comparison, the S&P 500 rose 5.9% over the same period.

“The magnitude of the rally in March was certainly beyond almost all expectations,” Mark Freeman, chief investment officer at Socorro Asset Management LP, told Bloomberg. “Sentiment was very negative going in, especially with the first Fed rate hike on the horizon, which was reflected in the cash and low overall exposure.”

The promise of better performance by savvy active managers during periods of heightened volatility has not panned out.

According to new research by Europe’s markets watchdog, European active fund managers have failed to beat benchmarks during the volatility that followed the start of the Covid-19 pandemic, the Financial Times reports.

The European Securities and Markets Authority stated that the “hypothesis that active equity Ucits outperform their benchmarks during stressed market conditions [ . . . ] does not hold”.

Esma said it was “unable to identify a clear net outperformance of active funds compared with the prospectus benchmarks” over the three-and-a-half-month period as a whole.