You are at:Home»Investing»In the Know: Preparing for What Lies Ahead in the Markets Through 2019 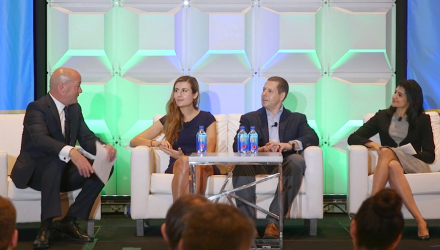 In the Know: Preparing for What Lies Ahead in the Markets Through 2019

With the capital markets turning the page on the first quarter of 2019, investors are regaining their confidence from a rebound in the capital markets after a tumultuous end to 2018. Heading into the early beginnings of Q2, it’s necessary for investors to remain strategic when it comes to deploying capital in the current market environment, especially with respect to selecting exchange-traded funds (ETFs) for their portfolios.

Each brings their unique perspective in the ETF space as part of the In The Know segment filmed at the “Inside ETFs” conference in Hollywood, Florida.

Why get strategic in 2019? One only has to look back to the last quarter of 2018 to know the reason why–the Dow Jones Industrial Average fell 5.6 percent, while the S&P 500 was down 6.2 percent and the Nasdaq Composite declined 4 percent.

How to Approach Fixed Income

The default bond play to get broad-based exposure might be the iShares Core US Aggregate Bond ETF (NYSEArca: AGG), which tracks the investment results of the Bloomberg Barclays U.S. Aggregate Bond Index. The AGG gives bond investors general exposure to the fixed income markets, but there are times when current market conditions warrant a deconstruction of the AGG to extract maximum investor benefit.

“A lot of managers are bringing their active strategies into fixed income and they fit in the wrapper,” said Dahya. “And not it just means if you liked them in mutual funds, you can like them in the ETF ecosystem. But secondly, factor based fixed income. Improving upon the indexes within the fixed income world. Factors like value, quality and momentum can be used to pick better bonds, similar to how they are in equities.”

Keeping an Eye Out Overseas

No more are the days when ETFs like the  SPDR S&P 500 ETF (NYSEArca: SPY) for U.S. equities and the  iShares Core US Aggregate Bond ETF (NYSEArca: AGG) for fixed income was all an investor needed to gain broad-based exposure to the markets via a 60-40 portfolio. While this may still be the case in certain instances, the market landscape is constantly changing and warrants adjustments to fit a case-by-case scenario.

“What I think it means for advisors who are building portfolios is you need more in your toolkit for that kind of environment, both on the, as we’ve talked about, declining return expectations, but also, the reality of volatility,” said Dahya. “And 2018 was the year that reminded us and reminded our clients of what it’s like to stay though equity markets.”

This calls to mind the need for multi-factor investing where investors are shielded from large drawdowns like the ones witnessed during the fourth quarter of 2019. In addition, funds that offer this built-in protection can also capture any upside when the markets rise.

“I genuinely believe that 2018 was the year that proved why you’d maybe want to consider something different than a pure market cap exposure,” said Dahya. “Now, that fits in the broader context of this, it did really well for you for the last 10 years, what’s it going to do for you for the next 10 years?”

So why hasn’t the capital markets embraced multi-factor funds wholeheartedly?

Part of the resistance for multi-factor investing that Dahya experiences stems from a lack of historical data. However, Dahya points out that these funds are starting to get longer in the tooth and have years of live testing behind them to fortify their results.

“They’re hitting four, five years, six years worth of live data. And now we’ve been able to see them in both up-markets and down-markets,” said Dahya.

For Dahya, a multifactor-based portfolio makes much more sense versus one that relies on a single factor. Given certain market conditions, investors need more than just a passive index that goes beyond a one-size-fits-all template that uses market cap weighting.

While these indexes provided simple, low-cost solutions, the need for even greater scrutiny is necessary in the quest for more alpha–a case for multifactor funds.

Maintaining the Structural Integrity of Exchanges

The final quarter of 2018 was a low point for U.S. equities, particularly during Christmas Eve, but Yones witnessed something out of the ordinary on a typically slow day–the volatility actually drove volume for ETFs as investor were quick to get in and out of the marketplace.

“We saw tremendous volume in a lot of these fixed income ETFs,” said Yones. “1000%, 1,200% of daily volume were going through these ETFs without even creation redemptions in some cases.”