You are at:Home»Equity ETFs»In the Know: Implications for ETF Portfolios 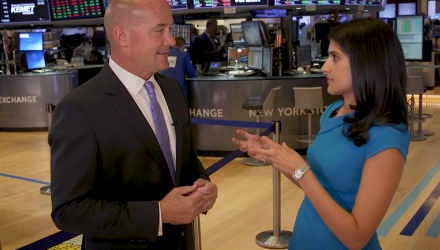 In the Know: Implications for ETF Portfolios

October rained on investors with heavy downpours of volatility, causing them to wonder whether the historical bull market they’ve experienced the past 10 years is finally over. In the latest update of “In The Know,” Yasmin Dahya, Head of Americas Beta Specialists at JP Morgan Asset Management, helps to quell investor fears of where the market is heading.

“I think the U.S. equity market right now is interesting for investors given how well it’s done,” said Dahya. “But a lot of people are beginning to think, ‘What do I do now?’

“There’s really two types of conversations that I’m having,” added Dahya. “The first is, ‘How do I be more defensive?’ Stay invested with something that can weather more volatile times. The other is ‘Where do I find opportunities still?’ If I look under the hood, maybe we’re late cycle, but are there pockets of opportunities that I can take advantage of.

If investors want to be more defensive, Dahya recommends strategies that are not weighted by market capitalization. The JPMorgan Diversified Return US Equity ETF (NYSEArca: JPUS), for example, incorporates multi-factor strategies that gives investors the defensive aspect they need to shield their portfolios from a downturn as well as an offensive component that exposes investors to the factors that are more in favor given present economic conditions.

“For most investors, having balance is enough—value, quality and momentum,” said Dahya.

The Resurgence of Value

FANG (Facebook, Amazon, Netflix, Google) stocks have been largely attributed to helping fuel the decade-long bull run, but while the growth and momentum strategies they’ve been associated with may be falling out of favor amid October’s sell-off, one factor is experiencing a resurgence—value. Dahya points out that value is especially attractive given their deep discounts while growth and momentum were soaking up the limelight of the bull run.

“I think there’s one factor right that I think is quite attractive to us, which is the value factor,” said Dahya. “If you think about value, it’s going through its second worst underperformance since 1990—it’s been very painful for value investors, but what that has meant is two standard deviations cheap and that level of cheapness has historically been associated with 14% return for the next 12 months.”

To Dahya, being invested in value right now will allow investors to capture the upswings that can come hard and fast.

“The way it (value) performs is like a coil spring,” cited Dahya. “The returns in value come in very short periods of time. What that means is you really want to be in the factor even though it’s down to catch that upswing.”

“One of the most interesting things to me in the ETF market is that there are now products coming to the market where you can take advantage of themes like that,” Dahya added.