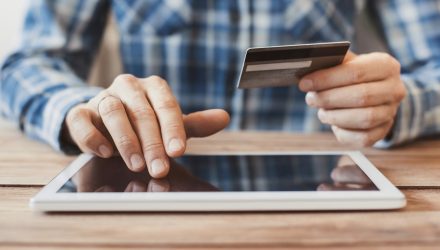 How to Use QQQ for E-Commerce Exposure

Home to more than $58 billion in assets under management, the PowerShares QQQ (NasdaqGM: QQQ), which tracks the tech-heavy Nasdaq-100 Index, is one of the largest exchange traded funds in the U.S.

It is also thought to be a technology ETF in disguise. To an extent, that view is accurate as QQQ allocates 60% of its weight to technology stocks. However, consumer discretionary is the ETF’s second-largest sector weight at 21.5%, putting QQQ in a prime position to benefit from the online shopping boom.

The retail sector has been under pressure on the rise of e-commerce outlets, like Amazon.com. Meanwhile, traditional brick-and-mortar stores are shutting down, with the threat of bankruptcy for smaller players, dragging on the broader retail segment.

“According to Adobe, this holiday season is off to a great start for retailers with an online presence. In 2017, US retailers posted e-commerce sales of $5.0 billion on Black Friday and $6.6 billion on Cyber Monday, reflecting year-over-year growth rates of 16.9% and 16.8%, respectively. In fact, this year’s Cyber Monday was the largest US online shopping day in history,” according to Invesco PowerShares.

However, with technology’s ascent and that of QQQ, come concerns that the Nasdaq-100 is too heavily exposed to a small number of stocks. Additionally, some analysts opine that the benchmark’s significant technology overweight leaves it vulnerable should tech stocks fall out of favor. Due to tech’s ascent this year, QQQ’s exposure to the sector has increased while its consumer discretionary weight has been mostly steady.