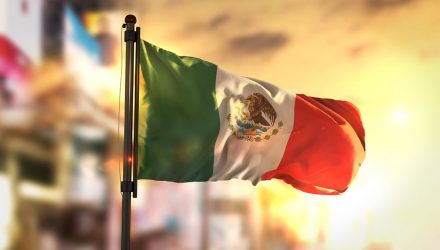 After being punished last year amid speculation Mexico’s economy and markets would be vulnerable to Donald Trump’s presidency, the iShares MSCI Mexico Capped ETF (NYSEArca: EWW), the largest exchange traded fund dedicated to Mexican equities, is one of this year’s best-performing emerging markets single-country ETFs.

Up more than 30% year-to-date, EWW faces some new challenges with the start of the North American Free Trade Agreement (NAFTA) negotiations this week. EWW tries to reflect the performance of the MSCI Mexico IMI 25/50 Index, which does not hedge its currency risks. Consequently, a strengthening peso has translated to an improved U.S.-dollar denominated return for EWW investors.

“The risk of a disruptive outcome from NAFTA renegotiations for the Mexican economy has fallen recently, and we assume that an eventual deal is unlikely to seriously undermine Mexican access to the US market, Fitch Ratings says. NAFTA-related uncertainty may still weigh on growth, but some aspects of renegotiation could present medium-term opportunities,” said Fitch Ratings in a recent note.