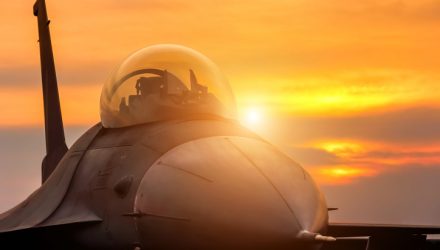 Aerospace and defense stocks and ETFs are now waiting on politics to play out, which is not surprising given the sensitivity of this group to federal budgets and spending.

“Since the U.S. government’s fiscal 2018 began on Oct. 1 without a budget, the Department of Defense is operating under a continuing resolution that lasts until Dec. 8; this freezes funding at fiscal 2017 levels and prohibits new program starts,” said Morningstar in a note out Friday. “We think the most likely outcome is an extension of the continuing resolution into next calendar year, and we don’t think the U.S. defense stocks we cover will react to this development.”

ITA is a cap-weighted ETF, meaning it has larger weights to big-name defense stocks, including Dow components Boeing (NYSE: BA) and United Technologies (NYSE: UTX). PPA holds 50 stocks “involved in the development, manufacturing, operations and support of US defense, homeland security and aerospace operations,” according to PowerShares.