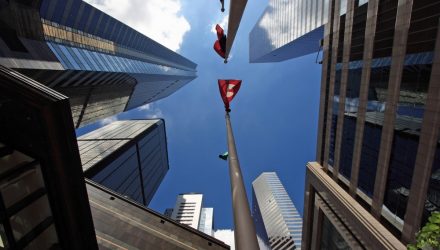 As the reality of a new Chinese Security Law takes effect, some Hong Kong exchange traded fund investors may consider the benefits of potentially increased capital flows from mainland China.

The iShares MSCI Hong Kong ETF (NYSEArca: EWH) has increased 13.7% over the past three months and is still down 9.9% year-to-date.

Some investors have overcome the initial shock of Beijing’s heavier hand in Hong Kong as more focus on how the new security law could curb unrest and encourage an influx of mainland money, the Wall Street Journal reports.

After being closed on Wednesday for a public holiday, the Hang Seng stock index strengthened Thursday, the first trading session since Beijing imposed a national security law on the financial hub.

When China initially planned the new legislation, the Hang Sang suffered through its largest one-day percentage pullback since July 2015, plunging 5.6%, but the index is now 3.5% above its close on May 21, the day prior to the selling.

Christopher Cheung, a pro-Beijing lawmaker in Hong Kong who represents brokerages in the city, argued that markets viewed the new law positively since it restricted major protests and dampened major unrest.

“Investors prefer stability over uncertainty. The July 1 protest is proof of that,” Cheung told the WSJ.

Cheung also anticipates more appeasement measures to soften the blow of the new law as the central government seeks to integrate the city into the fold.

“There’s a disconnect between the financial market and the social discontent among the general public,” Francis Lun, chief executive at Geo Securities Ltd., told the WSJ, adding that “Hong Kong’s financial market has been, and will always be, dependent on China’s support.”

For example, the secondary listings from NetEase Inc and JD.com have helped bolster the market. Meanwhile, bargain hunters from mainland China are looking into Hong Kong’s equity market, notably Chinese companies that are trading at a discount to peers in Shenzhen and Shanghai.

“The Hang Seng Index is the cheapest index that I see right now across Asia,” David Chao, global market strategist for Asia Pacific ex-Japan at Invesco, told the WSJ. The Hang Seng benchmark trades on a price of about 11.3 times expected earnings.