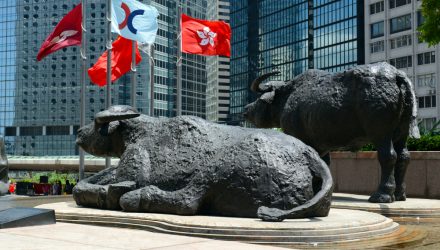 China has outlined a new national security law for Hong Kong in response to the months of unrest, prompting concerns over the Asian financial hub’s future and sending elated exchange traded funds reeling.

The iShares MSCI Hong Kong ETF (NYSEArca: EWH) was among the worst-performing ETFs of Friday, plunging 5.5% and breaking back below its short-term support at the 50-day simple moving average.

Many see Beijing’s move to assert its authority over Hong Kong as a start to the end of the “one country, two systems” model that allows the territory greater legal autonomy after the U.K. handed over its control over the region.

“When needed, relevant national security organs of the Central People’s Government will set up agencies in [Hong Kong] to fulfill relevant duties to safeguard national security,” according to Xinhua, China’s state-owned news agency.

President Donald Trump censured the move, adding that the US would “address that issue very strongly”, which contributed to speculation of another round of increased trade tensions between the two global economies.

Additionally, the U.S. could remove the special economic and trading status that it extends to Hong Kong but not mainland China as a whole if Washington deems the “one country, two systems” arrangement is no longer valid.

“The key is whether the national security law will affect US-China relations,” Kenny Wen, a Hong Kong-based strategist at brokerage Everbright Sun Hung Kai, told the FT, adding that further pullbacks were likely for Hong Kong stocks if protests surge over the weekend.