You are at:Home»Equity ETFs»Holiday Shopping Spurs Interest in Retail ETFs 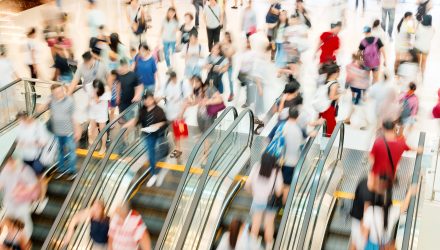 There is nothing like the holiday shopping season to renew investors’ interest in retail exchange traded funds. Even the SPDR S&P Retail ETF (NYSEArca: XRT), the largest retail ETF, which has been a laggard for much of 2017, is receiving renewed attention.

The retail sector has been under pressure on the rise of e-commerce outlets, like Amazon.com. Meanwhile, traditional brick-and-mortar stores are shutting down, with the threat of bankruptcy for smaller players, dragging on the broader retail segment.

“It’s not just holiday shoppers who have been on a spending spree this week. Shop ‘til you drop also seems to have been the mindset of investors, who have flocked into retail exchange-traded funds,” reports Bloomberg. “About $320 million has been poured into the SPDR S&P Retail ETF over the past two days, the most since Jan. 17, according to Bloomberg data.”

nvestors considering other retail exchange traded funds, may want to look at the VanEckVectors Retail ETF (NYSEARCA: RTH). An obvious advantage of RTH is its massive exposure to Amazon. Additionally, Wal-Mart (NYSE: WMT), one of the best-performing Dow stocks this year, is one of RTH’s largest non-Amazon holdings.