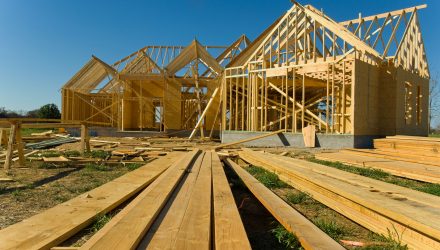 Headwinds For a Homebuilders ETF

The housing market took a blow today as the Department of Commerce reported that U.S. homebuilding fell to a nine-month low in June while building permits declined for a third straight month.

In addition, housing starts fell by 12.3 percent to a seasonally adjusted annual rate of 1.173 million units in June– the lowest level since September 2017.

“XHB’s resilience in the face of disappointing data and gloomy headlines naturally piqued our contrarian interest, particularly given the fund’s hold of key chart support at $39 (which previously marked the June-September 2017 highs) amid net outflows. Since the start of May, investors have pulled more than $65 million out of XHB, but the ETF has repeatedly found a floor near the site of its year-ago highs over this time frame,” according to Schaeffer’s Investment Research.

Over the past month, XHB is modestly higher, but that small gain is deceiving because the equal-weight ETF has tumbled more than 14% over the past six months, bringing its year-to-date loss to over 9%. XHB now resides more than 4% below its 200-day moving average. XHB features significant exposure to consumer discretionary and retail stocks that are tied to the residential real estate trade.