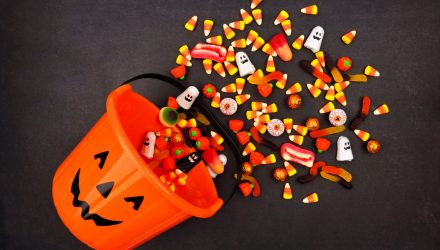 Consumer staples stocks and ETFs could received small boosts by an overlooked factor: spending on Halloween candy. Staples ETFs, such as XLP, are home to companies that make that candy as well as retailers that sell it. Think Dow components Walmart Inc. (etftrends.com/quote/WMT) and Walgreens Boots Alliance Inc (etftrends.com/quote/WBA), among others.

“Americans are expected to drop billions of dollars on candy, costumes, and other ghoulish goods and goodies for Halloween. Spending on Halloween candy is forecast to rise 4.2%, a bigger jump than last year’s 2.4% gain, but a pale shadow of 2016’s monstrous 7.6% gain,” according to IHS Markit. “We forecast Americans to scare up $2.5 billion to spend on Halloween candy this year, the most ever, which would spell $20.10 per household.”

Investors typically shift into consumer staples during bouts of market volatility because of the sector’s relatively generous dividend payouts and the slow-and-steady nature of the consumer staples business – consumers usually continue purchase basic products that staples firms sell regardless of market or economic conditions. Consequently, investors view the staples sector as a relative haven in the equities market that may help somewhat insulate a portfolio from risks like rising interest rates and increasingly restrictive trade policies under the Trump administration.

“Halloween candy prices this October are expected to be jolted back to life amid the specter of a global sugar price surge. Halloween candy price increases were frightful between 2005 and 2011, when they swelled at paces of more than 2% each year, but more recently candy inflation has been put on ice. For the past two Halloweens, candy prices have been underwater – much to the delight of little witches, goblins, and ghosts,” according IHS Markit.