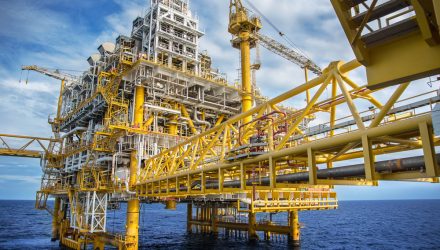 ETF investors have been shying away from the energy sector as crude oil prices plunged and more people around the world consider the ramifications of climate change.

Energy has been the worst-performing area of the S&P 500 for the past decade. The widely observed Energy Select Sector SPDR Fund (NYSEArca: XLE) has generated a 2.2% average annualized return, compared to the S&P 500’s 13.9% return

“Valuations are telling us that investors are losing confidence in the oil and gas sector,” Nick Stansbury, head of commodity research at the U.K.’s largest asset manager Legal & General, told the Wall Street Journal.

Investment money flows have also reflected the growing disinterest in the energy sector. The Energy Select Sector SPDR Fund experienced $1.3 billion in net outflows over the past year, with investors yanking out $347 million from the fund in the past week, according to ETFdb data.

Some investors are also disappointed with the energy sector’s limited attempts to adapt to growing climate change rhetoric and the shift toward cleaner fuel sources. For example, Sarasin & Partners LLP, a U.K. asset manager, dumped around 20% of its stake in Shell last summer due to the company’s plan to raise fossil-fuel output for the next decade.

“We were extremely disappointed that, despite your public commitment to act on climate change, [Shell] aims to deliver rising fossil fuel production to at least 2030. We do not view this as aligned with the Paris agreement,” according to a Sarasin & Partners LLP letter.

The fallout in the energy sector has also been reflected in its growing weigh among global indices. According to global index provider FTSE Russell, the weighting of oil-and-gas companies in factor-based indices fell in every category last year. Meanwhile, energy stocks in the S&P 500 dipped to 4% in January, its lowest level in at least three decades after peaking at over 14% in 2009.