You are at:Home»Featured»Greek ETF Retreats on Rising Tensions with Turkey 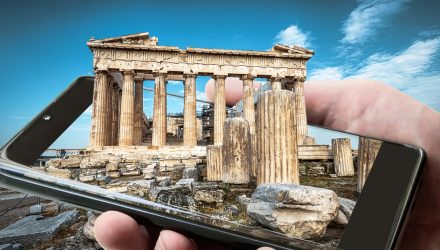 A Greece country-specific exchange traded fund slipped, with Greek markets suffering their worst blow in a month, on growing tensions with Turkey after a Turkish seismic survey ship allegedly entered the country’s waters.

The Athens Stock Exchange General Index fell as much as 3.5% on Tuesday and ended the session down 2.3%, the biggest single-day pullback since June 11, Bloomberg reports.

A Turkish seismic survey ship entered into an area Greece claims is part of its continental shelf. Turkey said it will carry out the survey until August 2 while Greek armed forces are on standby to monitor the movements.

“Greece is following all the developments with confidence and absolute readiness,” Prime Minister Kyriakos Mitsotakis said during a meeting with German Foreign Minister Heiko Maas.

Greece has been bracing for escalating tensions after Turkish officials threatened to launch hydrocarbon explorations off the islands of Crete or Kastellorizo.

If Turkey continues to test the sovereignty of Greece and Cyprus, the European Union will be ready to impose sanctions, the Greek leader added.

Meanwhile, Germany’s foreign minister urged Turkey to drill off the coast of Cyprus, adding the European Union must deliver a “clear” response to these types of activities in the eastern Mediterranean.

“This is the condition for there to be any future-oriented dialog between the European Union and Turkey,” Maas said. “There is a great deal of unity on this.”

Main opposition leader Alexis Tsipras held an emergency meeting Tuesday with defense advisers and former defense officials over Turkey’s plan, ekathimerini reports. They discussed “the continuous escalation of Turkish provocation, both before and immediately after the [EU] summit, where no sanctions against Turkey were ultimately discussed,” according to sources.